George Orwell wrote ‘A man who gives a good account of himself is probably lying, since any life viewed from the inside is simply a series of defeats.’ That’s why obituaries are important. I’ve been wanting to write an obituary for someone I really admire but thought on its own it might be less than uplifting. However with the recent passing of two other persons I have long admired I thought, hey, why not throw them all together and be done with it? Those who know me well know that two of my passions are architecture and music and as I am steeped in Irish DNA I am drawn to radicals. I think the reason I am drawn to music and architecture is that they blend that perfect contradiction, when at their best, – art and science combining to create the ethereal. Both, as it happens, are capable of being radical; of contradicting and challenging the status quo and getting us to look at things in a whole new light.

My first tribute goes to Zaha Hadid, the Iraqi-born British-based legendary architect. She is regarded by me as one of the great architects of modern times. I saw an obituary written about her that described her as the greatest female architect in the world today. Strange that, I thought. Surely we throw gender out the window when frequenting such lofty corridors? That aside, she has left behind a significant catalogue of stunning architecture that allows edifices to transcend from mere buildings into something magnificent. For those of a spiritual mindset transformation and transcendence are never far from one’s mind which leads me to my next ‘hero’.

Fr Daniel Berrigan died in the Bronx on April 30. He was an intellectual, like all Jesuits, and true to his order embraced a fiercely independent and challenging disposition. It’s Berrigan’s anti-war stance during the Vietnam War that brought him and his brother Fr Philip Berrigan to prominence when they removed government property and burnt draft cards. This earned the duo (along with seven others known as the Catonsville 9) prison sentences. Berrigan went into hiding and on the run but was ultimately captured by the FBI and went to prison in 1972 coincidentally the same year Billy Paul received his Grammy. An avid writer of poetry and books (over 50), Berrigan was also a reformer and an AIDS activist remaining true to his pacifist beliefs to the end. He first came to my attention in 1980 when, with his brother and six others as part of the Plowshares Eight, he created the Plowshares Movement. As a group they broke into a nuclear facility in Pennsylvania where they damaged nuclear warheads and blood was spilt literally and metaphorically. Here was a life lived in total dedication to a firmly held set of beliefs.

Talking of Pennsylvania, Billy Paul, my third ‘hero’ was born in Philadelphia. He was an iconic soul man who had longevity in the music industry and used it for social reform. Reflecting on it activism, music and architecture have a lot in common – they can soothe and challenge in equal measure. I recall hearing ‘Me and Mrs Jones’ on the radio when it first came out. Likewise I have a clear recollection of my parents’ moral outrage to it given it dealt with the scandalous (in 1972) notion of a man having an extra-marital affair. The fact that I had heard it and enjoyed the guilty pleasure made this 12 year old feel somewhat complicit in the whole matter. Unlike Berrigan, the easy lyrics which Paul made sound his own in fact belonged to others most notably Gamble and Huff, McCartney and Elton John. Like few others though, he was able to put such an indelible stamp on these songs they sounded like they were written especially for him. In listening you know their origins but they uniquely also retain few traces of the original version. I commend for fantastic listening Paul’s version of Elton John’s ‘Your Song’ which at a riotous 6.23 minutes is way longer than the original at 4.03. How does he manage to pad out the extra 2.20 minutes? I can only urge you to Google his version and enjoy. 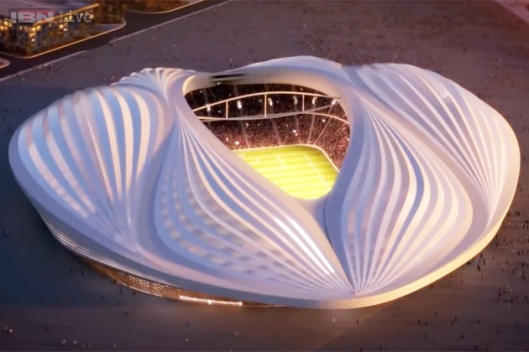 Hadid’s architecture, like Paul’s voice or Berrigan’s poetry, is not without its verdancy or its radical undertones. No stranger to the middle-east and the religious and political contradictions contained therein, she embraces curves like few others in both physical and metaphysical form. Her design for the World Cup stadium in Qatar (the El Wakrah stadium) is now described as an ‘accidental vagina’ and it’s easy to see why. Some have seen it as a deliberate middle finger up to the phallic architecture of her male counterparts. To view it now feels like guilty architectural voyeurism. It also challenges the male-oriented Qatari society and the irony of 22 players chasing one little ball (i.e. sperm and egg) being played inside will not be lost on many. Radical..yup!

Hadid leaves a fantastic legacy of buildings including the London Aquatics Centre for the London Olympics, The Peak in Hong Kong, Cardiff Opera House and the Kurfurstendamm in Berlin, all of which I have had the privilege to visit. She’s multi-award winning including twice winning the RIBA Stirling Prize and the Pritzker Architecture Prize being the first woman to do so. She set her stall out, as it were, from the outset with the internationally acclaimed Vitra Fire Station in Germany in 1993: symbolism in that she really did set the world alight with some of the arresting architecture she created.

Daniel Berrigan was an award winner too, despite his modest lifestyle. His poetry secured him the prestigious Lamont award. Billy Paul was a Grammy Award winner and would arguably have received more accolades but for his embracing songs that dealt with post 60s civil rights issues such as ‘Am I Black Enough For You’ and McCartney’s ‘Let Em In’ which he re-tooled from a soppy love song into one about racial tolerance. Awards come and go – legacy remains.

Great people never really die of course. Legacy is something tangible and gives immortality. In the case of Hadid, Berrigan and Paul they have a catalogue that can be accessed time and again allowing us to ‘connect’ with them in a quite visceral way. This has me reflecting on what legacy will I leave? In management terms it can be hard to leave tangible evidence that you were here unless your job is the commissioning of things that last. Our legacy may be in the creativity of others; the vision, space and calm we create that allows others to achieve on our behalf. The very least we should set in terms of a legacy goal is positively touching and shaping those whose careers we have had in our custody. Get this wrong and we become destroyers of creativity and dreams. Get this right and we help grow the economy, create harmony and enable great things to happen. Through this perhaps life is breathed into our own legacy. There’s a quiet radicalism in this that I’m sure Hadid, Berrigan and Paul would embrace.