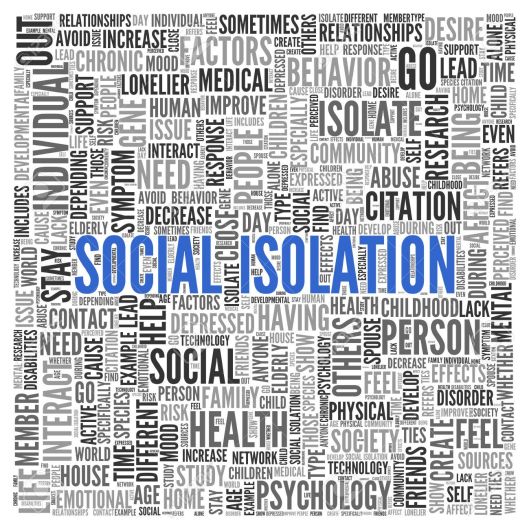 One of my vivid memories of picking my children up from school – a pretty rare event I have to own up to – was observing the different waiting patterns of men and women. What stood out was that the women were clustered in groups and there was a gaggle of conversation and laughter while the men pretty much stood alone, silent with arms folded across chests. Women just seem to do this ‘tend and befriend’ stuff better than us guys. There’s a world of evolution that sits behind it of course. With men hunting on the savannas of Africa we would be either alone or in small groups often in silence or words seldom spoken. We would be alongside one another and not face to face. Women on the other hand, tending crops and child rearing, would sit around in groups talking and laughing constantly providing an audible warning to foe that they are a bigger group than their actual numbers might suggest. It’s a phenomenon I noticed when picking my teenage children up after dances and parties. With my daughter the car was full of conversation, everyone seemingly talking at once. Picking my son and his mates up was the exact opposite.

So the third of my blogs for men’s health week is focusing on social isolation. In my first blog I concentrated on suicide and the notion that sharing your feelings and getting issues off your chest so they don’t fester, is part of staying mentally healthy. Perhaps the gender disparity in suicides (more men than women) is partly explained by our lesser ability at interacting and sharing feelings? But social isolation isn’t just about mental health. There is a growing body of evidence that is suggesting that social isolation has a detriment to our physical health and well-being as well. I was listening to the Big Ideas podcast from the ABC delivered by Alex Haslam who is Professor of Psychology at the University of Queensland. What he said was quite startling and worth repetition here. He claims that if you are over 50 and join just one social group/club today you will reduce the chances of getting depression by nearly a quarter. Wow. Sign me up!

Haslam goes further claiming that being socially isolated could be worse for your physical health than smoking or eating junk food. Hard to believe so I thought I would check to see if there is any meta data to support this. Sure enough there is. Peer-reviewed research undertaken by Holt-Lunstad, Smith and Layton called ‘Social Relationship and Mortality Risk: A Meta-analytic Review’ published in 2010 concluded across the 148 studies they reviewed, that the influence of social relationships on risk of mortality is comparable with well-established risk factors for mortality. In other words, right up there with bad diet, smoking, drinking to excess, lack of exercise and high blood pressure.

Clearly these factors become more of an issue as we age and particularly if we lose a life-partner through divorce or bereavement. So one mate consoling another when advised that his partner has left him by saying ‘mate get over it – it won’t kill you’ might actually be factually wrong! Leaving the establishment of social networks and community until the back end of life is problematic for a number of reasons:

Many of us, and I think this is a gender bias here for men, run the risk of defining ourselves through our jobs and building social networks through work. The trouble here is they can finish very abruptly when the person leaves that workplace, or the workforce. It used to be a common phenomenon for men to retire and be dead a short time later from heart attack or stroke. Perhaps the causation was a sudden loss of social contact? There is another shortcoming of the work as essential social contact approach. Oftentimes the work social contact is a by-product of a working relationship where the focus remains primarily on the work, meaning the depth of the social connection is shallow. The ability to feel emotionally engaged and share thoughts, fears, feelings and aspirations are less likely to occur under such circumstances.

Then there is the issue of time. Where long work hours are commonplace there is little time for establishing and nurturing good social networks. Compound this with men being less able to forge relationships with other men anyway and there is a bit of a recipe here for shortened life expectancy. And sure enough men don’t live as long as women. Perhaps this is why?

There is one thing knowing this and quite another doing something about it. One sure-fire way to address the issue is by joining a men’s shed. The Men’s Shed movement is amazing and a great example of men (mates) helping each other out. If we do see a closing of the gap in gender-based life expectancy I suspect the Men’s Shed movement will have had quite a significant role in it. For more information on your local men’s shed look here.

Best not to leave it for our twilight years though. At CTC we recognise that, so we have recently introduced an initiative called Social Isolation Prevention Scheme (SIPS) whereby you can take time out during the working day (up to three hours) a week to attend an established club or classes. That way, especially in the run up to retirement, these connections can be well-cemented. Many clubs hold classes during the day which would otherwise be unavailable. Having a common goal like learning wood work, or say lead-lighting, creates a foundation for subsequent social interactions, engagements and friendships to flourish.

The by-products for our business are pretty straightforward. A more contented worker is a more productive worker. A worker with social networks is healthier and more resilient in the face of stress and mental illness and the skills learnt , albeit in cabinetry or woodwork, have elements of creativity, working with others, taking instruction, supporting and problem solving all of which are transferable and high valued in the workplace. If we care about men’s health we should care about men’s friendships.